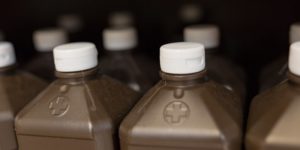 You may primarily be familiar with hydrogen peroxide because there’s always an old bottle of it stashed under your sink in case someone gets a cut or scrape. But what you didn’t know is that it’s also the secret behind teeth whitening in Oakton and warding off common oral health problems like gum disease. Read on to learn what makes this mild antiseptic in the health world a diamond in the dental field.

How Can Hydrogen Peroxide Benefit Your Oral Health?

Hydrogen peroxide is commonly used on the skin to prevent cuts, scrapes, and burns from becoming infected. Not many people know that it can also give you a healthier smile. It’s recorded that this antiseptic has been utilized in the dental field since 1913, being used to control plaque formation and treat gum disease. How exactly does it do this? Peroxide helps kill bacteria that are responsible for gum disease by releasing oxygen and eliminating the harmful ones that are responsible for the condition. The oxygen released makes it practically impossible for them to survive.

You don’t have to have advanced gum disease to benefit from this antiseptic. It can also help remove plaque from your teeth and reverse early symptoms of the condition and prevent oral health problems like cavities. You can get these benefits from hydrogen peroxide by brushing with the 3 percent concentration found at your local pharmacy, and flossing and rinsing afterward.

Another fact about this dental dream-solution that you may not have known is that it’s frequently used by professionals to whiten teeth. You can also find it in whitening toothpaste as well. The amount of peroxide that’s found in a product depends on multiple factors like how it’s meant to be used. It’s able to whiten teeth because it can easily pass into teeth and break down complex molecules that cause discoloration.

Depending on the product used to whiten your teeth, the concentration of peroxide will differ. For example, a product applied by a trained dentist in their office during professional teeth whitening treatment will be a more concentrated solution. This is because the substance is administered in a safe and monitored environment.

How Can You Use Hydrogen Peroxide Safely?

Using hydrogen peroxide as it’s directed is usually safe, but be sure not to swallow higher concentrations of the liquid. Even though peroxide is easily available to you, it’s best to check with your dentist before you start using it in your mouth. They can offer recommendations along with the safest way to utilize it.

This is especially necessary for more concentrated versions of the liquid because it can cause irritation or even some discomfort if it’s not used correctly. Be sure to utilize products with hydrogen peroxide as directed and make sure they have an ADA seal of approval. Your dentist can also point you in the right direction when it comes to using whitening products that are gentler on your gums and safe for your mouth.

Dr. Pasquale Giordano has been dedicated to improving his patients’ oral health and giving them a smile that they’re proud to show off since he graduated from the University of Maryland in 2004. He completed a general practice residency at the Baltimore Veterans Affairs Hospital where he received advanced training and knowledge about a variety of dental services. He understands the importance of an aesthetically pleasing smile, which is why he offers cosmetic treatments such as professional teeth whitening. For questions or to schedule a consultation for whitening, visit Oakton Dentistry by Design’s website or contact 703-938-4300.

Comments Off on Hydrogen Peroxide: The Secret Behind Teeth Whitening

Sorry, the comment form is closed at this time.